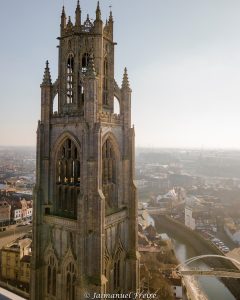 Wednesday 17 June saw St Botolph’s celebrate its feast day. Rather fittingly it was also the first Zoom service from St Botolph’s. Not many people know who St Botolph was, to those in Boston he is well known, but they still don’t perhaps know about his life. The information below gives a small insight into his life & who he was.

St Botolph was one of the earliest and most revered of East Anglian saints, and became known as the patron saint to of wayfarers. Botolph and his brother Adolph were young Saxon nobles living in the 7th century, and were sent for their education to a Benedictine Abbey in France. Adolph rose to be a Dutch Bishop, whilst Botolph came back to his native East Anglia. He was given, by King Anna, a grant of land on which to build a monastery. This land was Icanhoh, a site that has been said to be the present Boston (Botolph’s Town) in Lincolnshire but is more likely to have been Iken, near Aldeburgh in Suffolk. Certainly Icanhoh was in a marshland area, for Botolph was said to have expelled the swamps of their “Devils” – in fact, he probably had the marshes drained and eliminated the “marsh gas” with its night glow.

St Botolph died after a long life of Christian endeavour and teaching in 680AD. The monastery lived on for two centuries more but in 870AD was destroyed by Danish invaders. King Edgar (963-967AD) ordered that the remains of the saint be taken from the monastery ruins, and be divided into three parts: the head to be taken to Ely, the middle to be taken to Thorney, and the remainder to be taken to Westminster Abbey. As his relics were conveyed from place to place, his name became associated with wayfarers and travellers.

According to the Oxford Dictionary of Saints, 64 ancient English churches were dedicated to him, but later research has suggested the true number may have been as high as 71. There is a high concentration of dedications in East Anglia. Our very own St Botolph’s Church is one of the most famous. Boston or ‘Botwulf’s town’ also gave Boston, Massachusetts its name.

St Botolph has no place in the Prayer Book Calendar but his feast day and our Patronal Festival on the 17th of June.

Sign up to get the latest news to your inbox