oom over the South porch contains the parish library.   Reputed to be the tenth best parish library in the country, it now contains over 1200 books (1600 volumes), and was established by Archbishop Laud’s edict in 1634, though records show some form of  library could have been in existence in 1410.  In 1634, it is thought that the Archbishop’s Vice General, Sir Nathaniel visited the church and concluded that:-

“………….. the room over the porch of the said church shall be prepared and decently fitted to make a library to the end that in case any well and charitable (sic) disposed person shall hereafter bestow any books to furnish the same they may be  there safely preserved and kept to and for the furtherance and help of such ministers as shall preach in the said church and others who shall repair there.”

There is a fine and important collection, mainly from the 17th century, of the kind which clergy and other educated people of the parish might use. There are, also, some books printed in Europe by Gryphius, Stephanus and the Elzevirs. We have a copy of the 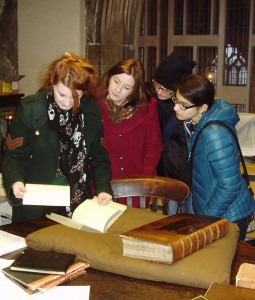 1549 Prayer Book  and early editions of  Foxe’s Book of Martyrs – John Foxe was born in Boston. Local Historian, Pishey Thompson wrote the definitive history of the town and there are several copies of this in the library.

By 1819, when Archdeacon Goddard of Lincoln ordered a catalogue to be made, it listed about 1500 books, but the Archdeacon threw out books that he considered ‘trash’, sold many of them and used the money to repair others. There was no full catalogue in existence until 2006 when one was published, part funded by a Heritage Lottery Fund grant. Copies are available from the church in hardback, paperback or CD. At the same time over 700 books were conserved and/or repaired.

The current Parish Records are housed in the library, though records over 100 years old are now stored at the Lincolnshire Archives in Lincoln and can be accessed there.

PLEASE NOTE THAT THE ONLY ACCESS TO THE LIBRARY IS BY CLIMBING 24 NARROW AND STEEP STEPS.

Donate to the Parish of Boston to help with our restoration